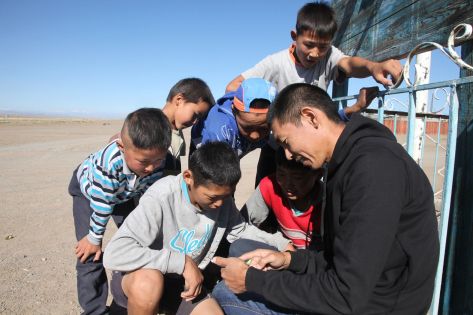 Chingis Azydov was born and grew up in the Republic of Kalmykia in the Russian Federation.

For the past ten years he is actively involved in the documentation, preservation and revitalization projects of Kalmyk language and culture.

2014 – 2016: Research Assistant in language and folklore documentation projects.
Collaboration with Prof. Thede Kahl and M.A. Ioana Nechiti in the fieldwork in Kalmykia, Xinjiang (China) and Western Mongolia. The main activities involved translating from the different Oirat varieties into English, to help saving the materials and processing the data. The Kalmyk people call themselves Oirat.

December 2013 – september 2014: Initiator and  teacher in the Throat Singing School.
He met and recorded many performers of Kalmyk songs among the elder generation of Kalmyk native-speakers. As the musical director of the project Chingis Azydov taught young students in the ancient Mongolian art of throat singing „Khoomii“. At the end the students recorded a song Album.

October 2012: Assistant and translater in the realization of a documentary:
He participated in the international project of the independent film-maker Vincent Moon. He helped the project group with the expedition logistics and arrangement of video recordings of Kalmyk epic singers and folk ensemble “Erdm“ (The Art).

October 2011 – December 2013: He was involved in different newspaper projects.

2010 – 2015 he was part of a group of enthusiasts who established the organization of Oirat culture „Tengrin uidl“ (The Milky Way). They launched the „Oirat club“ to help youngsters to start speak in their own language, organized charity events and concerts.

Chingis Azydov at a concert in Porgy & Bess together with Phillip Kienberger and Andreas Schreiber.